“Youth for the Environment”: Online contest for school and youth projects

The online platform “EnviroNetwork.eu” offers a contest for school and youth projects in the fields of environmental and nature protection. The main prize will be the free participation in the four-day International Environmental Convention in Freiburg from 9 to 12 March 2017.

Young people aged between 16 and 28 can participate in the contest until 25 November 2016. In order to do this, they set up their environmental protection project on the "EnviroNetwork.eu" online platform which was initiated by the FWTM in cooperation with the European Environment Foundation. The winners will be chosen in a subsequent voting on the corresponding Facebook page. The project with the most "likes" wins.

Online Contest – Opportunity for young environmental groups
The online platform EnviroNetwork.eu, which was also initiated by the FWTM and the European Environment Foundation, offers a contest for youth projects. The main prize is the free participation in the entire four-day International Convention of Environmental Laureates from 9 to 12 March 2017, the participation in environmental classes of the UWC Robert Bosch College Freiburg and, as a highlight, the presentation of their own project in the large plenum on the Young Talents Day on 11 March 2017. 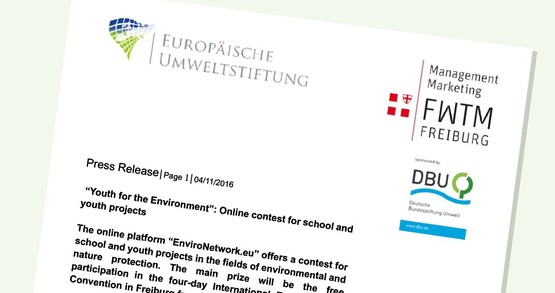