For five years the European Environment Foundation, in cooperation with the FWTM (Freiburg Wirtschaft Touristik und Messe GmbH & Co. KG), has organized the International Convention of Environmental Laureates in Freiburg. On the corresponding Young Talents Day at the UWC Robert Bosch College Freiburg, young people have the unique opportunity to meet renowned climate, nature and environmental protection experts from more than 40 different countries. Imagine discussing the protection of species with a rhino conservationist from South Africa, telling a solar stove manufacturer from India about the solar study group at your own school, or listening to the experiences of an anti-nuclear activist from Russia: These are unique experiences you will never forget.

Optimized concept funded by badenova innovation fund for climate and water protection
With an optimized concept to increase the quality of the Young Talents Day, a sponsorship from the badenova innovation fund for climate and water protection was gained in the course of the fifth anniversary of the Convention in 2016. The funding goes into the planning of the Young Talents Day 2017, for which the concept was revised again and improved on the basis of the experience of 2016. For the upcoming Young Talents Day on 11 March 2017, all discussion tables, the so-called round tables, are divided into different topics. The young people will receive an organized preparation for the introduction into the respective topic. In addition to the round tables there will be interactive group work with the international laureates. At ”Market & Music” local environmental initiatives from the region present themselves accompanied by the UWC Freiburg school band.

First-time direct application for the Young Talents Day
Another significant addition is that young people can apply for participation for the first time directly to the organizer. In addition to the participation via the partner institutions of the Young Talents Day – Regional Council of Freiburg, Freiburg University, UWC Robert Bosch College Freiburg – there are now 20 spots available for direct application. “We are implementing the idea of an improved quality of the event,” says FWTM CEO Bernd Dallmann. “The best candidates will be chosen in an internal selection process. This brings additional interested, committed and enthusiastic young people to the Young Talents Day, which further increases the number of participants.”

International Convention of Environmental Laureates and  Young Talents Day
Since 2012, the International Convention of Environmental Laureates has been held in Freiburg under the patronage of Professor Klaus Töpfer. More than 100 environmental laureates from more than 40 nations participate each year. In addition to internal events and the Young Talents Day, there are also several public programme parts. The Young Talents Day is organized in cooperation with the University of Freiburg, the Regional Council Freiburg and the UWC Robert Bosch College Freiburg. The young participants receive a qualified preparation. On Young Talents Day, they actively apply the acquired knowledge in discussions with the laureates, learn how to integrate global climate and environmental challenges into everyday context and are motivated by their role models for their own environmental commitment. 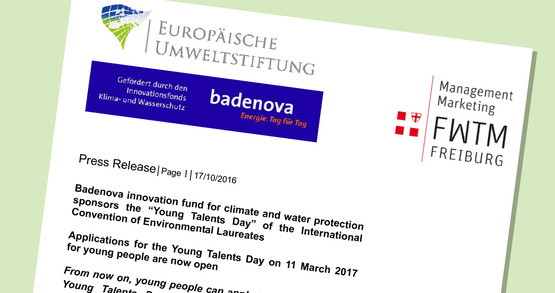