On Friday, March 10 at 8:00pm, Felix Finkbeiner will present his successful environmental project “Plant-for-the-Planet” in the course of the 6th International Convention of Environmental Laureates at the Konzerthaus Freiburg. The children's and youth initiative “Plant-for-the-Planet” was founded in 2007 by the then nine-year-old student Felix Finkbeiner. In his speech “Planting one trillion trees – Why we need a trillion more trees”, he presents his foundation which follows the objective of raising awareness among children and adults towards global justice and climate change and actively fights the latter through tree planting campaigns. The public speech is in English (admission 8 Euros, discounted admission 5 Euros). Tickets are available at www.reservix.de and at all ticket agencies as well as the box office.

In line with the speech given by Felix Finkbeiner, a “Plant-for-the-Planet” Academy will be held at the Konzerthaus Freiburg on March 11. At the academy, children from nine to twelve years will broaden their knowledge about the causes and consequences of the climate crisis. The highlight of the day is a planting campaign, in which the participants plant trees on a storm-damaged and ash dieback-affected area near the IKEA under the guidance of the district forest ranger of Opfingen, together with the environmental laureates Makala Jasper from Tanzania, Samson Tsegaye from Ethiopia and Denice Marçal Rambaldi from Brazil.

The “Plant-for-the-Planet” Academy in Freiburg is made possible by the commitment of Life Food GmbH Taifun-Tofuprodukte, the European Environment Foundation and the Freiburg Wirtschaft Touristik und Messe GmbH & Co. KG (FWTM).

Press Invitation:
Press representatives are invited to the speech given by Felix Finkbeiner on March 10 at 8:00pm at the Konzerthaus Freiburg and to the “Plant-for-the-Planet” Academy on March 11. Please register at press@european-environment-foundation.eu. A separate press invitation with a meeting point and time will follow for the tree planting campaign with the environmental laureates. 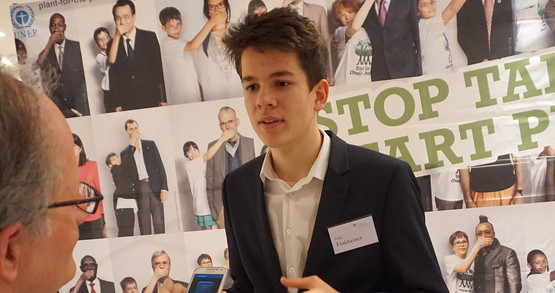