Basel/Freiburg, 7 March 2016. From 10–13 March, Freiburg is once again playing host to environmental and climate experts from around the world. Under the patronage of Klaus Töpfer, the European Environment Foundation (EEF) has invited the winners of the most renowned international environmental awards to Freiburg.

The numerous environmental laureates returning to the event after having taken part in previous years as well as the many activists attending it for the first time are a testament to the growing popularity of the Convention of Environmental Laureates. The participants also include representatives of politics, science and business. The Freiburg International Convention of Environmental Laureates has developed into a leading platform for participants to share experiences and knowledge in the fields of environment and climate protection and global environmental policy. The more than 100 environmental laureates from 40 countries include dedicated conservationists, civil rights campaigners, publicists and scientists.

Oleg Bodrov is a physicist and environmental activist. After finishing his studies at the then Leningrad Polytechnic Institute, he began his career testing nuclear submarines and led a research group at the Khlopin Radium Institute in St. Petersburg. After visiting the contaminated area of Chernobyl in 1986, he turned his back on the nuclear industry and became active in environmental movements. Since 2005, he has been head of an international NGO campaigning for the safe decommissioning of Russian nuclear power plants and the permanent disposal of radioactive waste. His NGO had to pay a fine to the Russian Ministry of Justice in 2015 after being accused of foreign espionage.

Dr Mozhgan Savabieasfahani raises public awareness of the devastating effects of war on the environment and public health. In particular, she has brought public attention to the increasing level of birth defects in Iraq and to how these defects can be associated with chemical contamination during the 2003 Iraq War. Originally from Iran, Dr Savabieasfahani is an environmental toxicologist based in Ann Arbor, Michigan, USA.

Nadezda Kutepova is committed to helping the people of Mayak, a region which has remained closed to outsiders since a nuclear accident took place there in 1957. Kutepova helps people suffering from leukaemia, lymphoma and other types of cancer to obtain access to medication and tries to gain compensation for them. In November 2015, Kutepova was forced to flee to Paris after the work she was performing for her environmental organisation caused several news reports to accuse her of acting as a foreign agent. After her home was shown on television, Kutepova decided to go into exile.

Paul Walker is the International Director of the Environmental Security and Sustainability (ESS) Program at Green Cross International (GCI). The objective of ESS is to facilitate safe disarmament, the non-proliferation of nuclear weapons and the clean-up of weapons stockpiles and toxic waste on an international scale. Paul Walker is a former professional staff member of the Armed Services Committee in the U.S. House of Representatives and has a PhD in international security studies from the Massachusetts Institute of Technology (MIT). He has been head of the Green Cross International office in Washington since 1996 and is a US Army Vietnam veteran.

As a member of South Somerset District Council, Keith Wheaton-Green has been dedicated to the construction and development of citizen-owned hydroelectric power plants since 1999. Wheaton-Green’s work has seen him run information events to give interested mill owners the chance to discover the potential of hydropower as an environmentally friendly form of energy. This led to the formation of the South Somerset Hydropower Group, a committee of 12 mill owners who generate electricity for 150 households.

Programme:
Starting with the welcome address from Freiburg’s Mayor Dieter Salomon, this year’s Convention of Environmental Laureates opens with a series of exciting presentations in Freiburg’s Historisches Kaufhaus (historic merchants’ hall) on the evening of 10 March. Global goals for people and the planet – so what’s the plan? – this is the burning question which Klaus Töpfer, Rainer Grießhammer and Michael Wadleigh attempt to answer in their presentations during the opening ceremony.

The second day of the Convention is dedicated to the transfer of knowledge and networking, as the environmental laureates are given the opportunity to present their projects and attend workshops. The day closes with a review of the results of the Paris Climate Conference by Peter Hennicke, followed by a discussion into how the environmental laureates can contribute to achieving the goal of keeping the rise in the global average temperature below 1.5 degrees. Friday evening also touches on the topic of critical consumption with the screening of Marco Keller’s AGROkalypse, which focuses on the Indigenous population of Brazil and how their homes are being taken over by fields growing genetically modified soy. The film takes a critical look at how we feed ourselves and the effects of our food consumption habits. It is being shown in Freiburg’s concert hall at 8:00pm on Friday 11 March and is to be followed with an interview of the director by Reinhild Dettmer-Finke. The audience has the opportunity to sample tofu snacks from Wolfgang Heck from Taifun.

During the Laureates meet young talents day on Saturday 12 March, school pupils from ten schools in the Freiburg region as well as students from the University of Freiburg’s Faculty of Environment and Natural Resources and the UWC Robert Bosch College have the opportunity to meet the international environmental laureates. Round table discussions enable the participants to talk about the latest environmental policy issues.

For the first time in the history of the International Convention of Environmental Laureates, the public programme is centred around a film premiere. Carl-A. Fechner’s new feature film POWER TO CHANGE – The EnergyRebellion is making its debut at the event. Fechner uses the film to support the worldwide transformation towards renewable energy by communicating the message that a global energy transition is possible. The exclusive film premiere is open to the public and takes place in the Konzerthaus at 8:30pm on Saturday 12 March. An interview with the director and live music round off the launch party.

Prof. Dr Eicke R. Weber, Director of the Fraunhofer Institute for Solar Energy Systems, is the Chairman of the Board of Trustees. The Foundation was established by its board members, Dr Bernd Dallmann and Dipl.-Ing. Rolf Hiller.

14–17 March 2013
2nd International Convention of Environmental Laureates
Main theme: New coalitions to address limits to growth
Adoption of the “Call for action to policy makers and pioneers of change”

10–13 April 2014
3rd International Convention of Environmental Laureates
Keynote speaker: Jeremy Leggett
Joint appeal by the 160 environmental laureates in the New York Times: “An appeal to the world’s foundations and philanthropists by the world’s environmental prize winners” 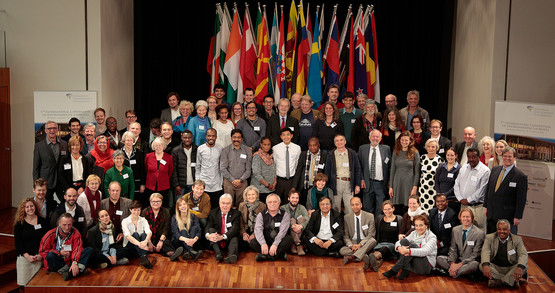