More than 100 environmental award winners from around the world signed an appeal at the fourth international convention in Freiburg, in which they urge the governments to introduce a Co2 emission tax and stop subsidy for fossil fuels.

Basel / Freiburg, 14/03/2015 – “Floods, storms, droughts, and wild weather fluctuations plague the world. Polar ice shields are melting and the sea is rising. Severe heat waves, freshwater exhaustion, local air pollution and the dramatic loss of biodiversity are reaching alarming levels” - this is how more than 100 award winners, who met at the 4th international environmental convention in Freiburg, summarized the world's climate situation.

“For us, climate change is a reality at all levels", reported for example Alicia Kaudia – the Environment Minister of Kenya – in her presentation on the adaptation to climate change. “Africa is the continent most affected by climate change, at the same time it has the least technical and financial ability to adapt to the consequences. In Kenya, 18 million people live in extreme poverty.”

The laureates prompted the governments in an urgent call “to introduce a tax on CO2 emissions and to phase out fossil-fuel subsidies to help put humankind on track to avert catastrophic climate change.”

“Emission taxes involve – compared to CO2 trading – great advantages”, remark the laureates in their appeal. “They are easily administered, calculable, and offer less opportunities for fraud and loopholes. The revenues will partially be used to finance the international Green Climate Fund, to help developing countries mitigate and adapt to climate change and maintain healthy ecosystems.” (full appeal in the appendix)

In order to facilitate the introduction of such a tax, it should start relatively low to begin with, with five dollars per ton of CO2. Every year, the tax should be increased by one dollar. “This way, economies and businesses have sufficient time to adapt to higher costs considering the current low energy prices, and develop alternatives,” says Eicke R. Weber, Director of the Fraunhofer Institute for Solar Energy Systems ISE in Freiburg and  Chairman of the Board of the European Environment Foundation, moderator of the award winners at the final adoption of the appeal. “In 10, 15 or 20 years, fossil fuels will be so expensive that alternative energies will be ahead in all areas. This is exactly what we need in order to have a chance to achieve the required 2-degree target we all call for.”

The laureates see their appeal as a signal to the government representatives from around the world who will meet in Paris for the next climate summit COP 21 at the end of the year, to finally adopt an ambitious and stable climate deal there. “We hope that this call will contribute to the limitation of the atmosphere's pollution,” says Eicke R. Weber.

Organizer of the “International Convention of environmental Laureates” is the European Environment Foundation whose board of trustees is made up of 16 well-known personalities in the field of environmentalism Ernst Ulrich von Weizsäcker, Monika Griefahn, Marcello Palazzi, Professor Antonio Luque or Giovanna Melandri. The board is chaired by Eicke R. Weber, director of Europe's largest solar research institute, the Fraunhofer Institute for Solar Energy Systems in Freiburg. 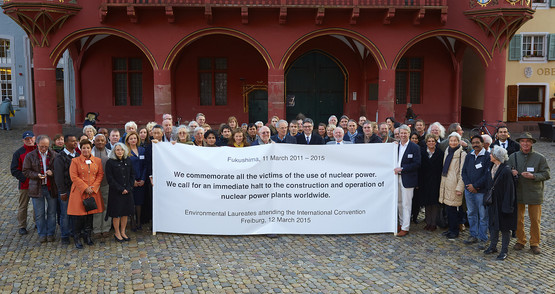