Basle / Freiburg, 11/03/2014 – From 10 to 13 April 2014 Freiburg will, for the third time, host a meeting of the world's leading figures from the areas of the environment, conservation of the natural world and climate protection: The European Environment Foundation un-der the auspices of Klaus Töpfer has invited to the Green City recip-ients of the most renowned and influential environmental awards, along with several representatives from the worlds of science and politics. Eighty-one activists, publicists and civil rights campaigners, as well as scientists, benefactors and entrepreneurs from a total of forty-one nations will meet for this globally unique interdisciplinary gathering which offers the chance to exchange interdisciplinary ex-pertise, develop personal contacts and nurture long-term relations, while at the same time supporting each individual participant in their efforts towards protecting the environment.

Supraja Dharini, for example, has developed several programs in India aimed at conserving ocean and forest diversity; Goran Gugic, from Croatia, is committed to protecting Europe's nat-ural heritage - in particular Croatia's river landscape; Nadeshda Kutepova, from Russia, founded the first human rights directorate in Ozerk, the abandoned nuclear city which gained in-famy when a container with atomic waste exploded in 1957 contami-nating the surroundings, and has made her name defending victims of the nuclear industry before the European Court of Justice.
Romina Picolotti from Argentina was, as Minister for the environ-ment, responsible for improving the laws covering environmental protection and was able to intensify monitoring procedures. In 1999 she founded the Centre for Human Rights and Environment (CEDHA) and is a committed campaigner worldwide for the protection of the climate. Samson Tsegaye from Ethiopia is head of the Solarenergie founda-tion and as such responsible for the creation of the first solar village in this East-African republic where 25,000 solar systems have been installed. Above all, this has granted people in rural areas access to electricity for the very first time.

These are just 5 participants of the convention in Freiburg whose prominence the European Environment foundation aims to increase beyond the boundaries of their country of origin during the year fol-lowing the award of a renowned environmental prize. The scale of their achievement cannot be emphasized enough. The recipients of these prestigious international awards are all committed campaign-ers in their own countries for human rights, better living conditions, the protection of the environment and adjustment to the results of global warming - one could even say, for the preservation of a world in which it is worth living. They all have one thing in common: They share a common vision and, working in difficult surroundings, they usually have only limited resources with which to turn this vision into reality. The congress offers participants not only support but also access to the public domain along with, in several cases, the neces-sary and urgent personal protection from powerful opponents and adversaries in their home countries. Furthermore, the convention offers the chance for successful entrepreneurs and leading figures from international NGOs to meet.

Even such prominent laureates as the two current recipients of the Alternative Nobel Prize, Hans Herren and Paul Walker, are among the participants of this year's congress. Hans Herren worked successfully for the introduction of organic farming methods in the fight against starvation, poverty and disease in developing countries. Today he is president of the American Millennium Insti-tute and head of the Swiss foundation, Biovision. Chemical weap-ons expert Paul Walker, on the other hand, played a major role in getting the USA and Russia to sign up to the international conven-tion on chemical weapons which prohibits the development, produc-tion, stockpiling and subsequent use of such weapons. Klaus Töpfer, former executive Director of the United Nations' environment program (UNEP), is the patron of the convention.

"The results of international summits on matters of environmental and climate protection have, unfortunately, proved to be inade-quate", stresses Ernst-Ulrich von Weizsäcker, member of the board of trustees of the European Environment Foundation. "The future lies in a two-speed model in which forerunners serve as role models and show that sustainable policies don‘t necessarily mean sacrifice, but can go hand in hand with economic progress, increased pros-perity and better standards of living."
It is the aim of the convention to bring such role models together once a year in order to create a network which not only spans the globe but is also has considerable influence on environmental and climate protection policies across the world. The convention not only promotes the establishing of personal contacts, but has proved over the last two years to be an ideal platform for ideas regarding the co-operation on new projects.

Program:
The 3rd International Convention of Environmental Laureates commences on the evening of 10th April 2014 in the auditorium of the Albert Ludwig University of Freiburg with an event which is open to the public: Monika Griefahn, former Minister for environmental affairs in the state of Lower Saxony, deputy director of the Right Livelihood Award Foundation and member of the board of trustees of the European Environment Foundation will open the convention with a lecture. Following this, Jeremy Leggett, managing director of Solaraid and CEO of Solarcentury, one of the largest solar enterprises in Great Britain will present his work in the areas of the solar economy and foreign aid. Baden-Württemberg's minister for environmental affairs, Alexander Bonde will report in his lecture on the difficult process of creating the "North Black Forest National Park", a protected forest area on one's own doorstep.

On day two, Friday 11th April 2014, the focus will be on sharing knowledge and experience, as well as providing networking oppor-tunities for the laureates: The emphasis will be on sharing infor-mation on current and future projects with a view to possible cooper-ation. On the evening of the 11th April a public lecture will be held by Blue Economy founder, Gunter Pauli, on the subject of the Blue Economy itself, a program aimed at protecting the ecosystems of the earth while at the same time creating employment opportunities.

Day three, Saturday 12th April, will be held under the motto of "Fighting for protection - using social media, boycotts and laws" and will provide the opportunity for an exchange of experience and knowledge between the laureates and young researchers, students and pupils. This exchange with inquisitive young people thirsty for knowledge and who have prepared for half a year for this gathering is, for many of the laureates, a special highlight of the convention. On this day too, the public are invited to a series of morning lec-tures: Between 11am and 12:30pm Rita Schwarzelühr-Sutter, Secretary of State in the BMUB and Bas van Abel, the founder of Fairphone, will both be speaking.

About the European Environment Foundation:
Organizer of the convention is the European Environment Founda-tion whose board of trustees is made up of 16 figures with substan-tial knowledge and experience of environmental matters, such as Professor Ernst Ulrich von Weizsäcker, Monika Griefahn, Mar-cello Palazzi, Professor Antonio Luque and Giovanna Melandri. The chair of the board of trustees is Eicke R. Weber, director of Europe's largest solar research institute, The Frauenhofer Institute for Solar Energy Systems. Founded in 2011, the European Environ-ment Foundation wants to set new impulses in environmental and climate politics. Its aim is to promote communication and global ex-change of expertise across and beyond society, politics, research and the economy. The foundation is based in Basle, Switzerland, and is subject to Swiss law.
Further information about the foundation as well as the program for the convention and a list of participants can be obtained at the following address: www.european-environment-foundation.eu 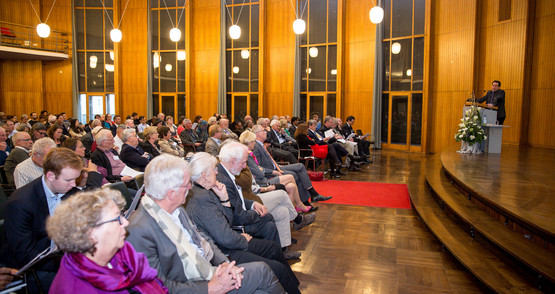