More than 100 environmental laureates urged political leaders at the 4th convention in Freiburg to increase the price of fossil fuels with a carbon tax and do something about climate change. We interviewed Eicke R. Weber on this matter – the director of the Fraunhofer Institute for Solar Energy Systems.

Basel / Freiburg, 14/03/2015 – Professor Weber, the participants have just adopted a declaration that urges political leaders around the world to impose a carbon tax. What's the point?

So far, the COP climate conferences have focused on agreeing on binding emission reduction targets for each country in the world. However, this has not shown any resounding results as an agreement like this is very difficult to achieve in many countries. On the other hand, there is agreement that there is an urgent need to reduce the emission of climate-wrecking gases drastically and as quickly as possible. Therefore, over 100 environmental laureates from around the world that are assembled here in Freiburg, are demanding to increase the price of emissions permanently with a carbon tax. Considering the current low energy prices, such a fee or carbon tax could be introduced almost imperceptibly, with an agreed annual increase in order to reach a higher and actually essential level.

We already have emissions trading which is not working. What lets you and the laureates hope that such a tax solves the problems and increases the price of the use of fossil fuels?

A well functioning emissions trade with a certain shortage on emission certificates could have a similar effect. However, without a minimum price for certificates, this mechanism has been proven ineffective. Therefore, a carbon tax would take us a step ahead.

The German population would certainly be ready for such a low but slowly increasing tax because it has recognized CO2 emissions as harmful. It is now our task to put this willingness of the population into political action.

Is nuclear power a solution? Many countries currently build new nuclear power stations in order to reduce the CO2 load. Even Japan wants to reactivate its shut down nuclear plants as they can no longer meet their climate goals since Fukushima. Compared to 1900, they have even increased...

Nuclear energy produces power with very low carbon emissions. This is true to begin with. However, nuclear power is not a sustainable solution of the carbon problem because there is still no solution to the disposal of radioactive waste and on the other hand, this technology entails catastrophic dangers of nuclear accidents as we saw in Tschernobyl or Fukushima. Not to mention the dangers that already come with uranium mining. Unfortunately, I have to predict that the next big nuclear accident will most likely occur if we do not hurry to phase out this technology. I am convinced: With another big nuclear accident without an earthquake or Tsunami, the acceptance of this technology will disappear worldwide.

Just take a look at Japan. The costs for the nuclear accident in Fukushima already amounted to 300 billion dollars. Realistically, such costs should be factored into every nuclear power plant. In addition, the power cost of a nuclear power plant that is built up to today's security standards is already at eleven cents per kilowatt hour. That's what the plans for the scheduled construction of the reactors at  Hinkley Point in the UK show. By comparison: Solar power in England is costing only ten cents per kilowatt hour and only half the amount in sunny countries. Therefore, the construction of new nuclear power plants has become simply uneconomic today. On the other hand, for about five to six billion dollars – the price of a  new nuclear power plant with about one gigawatt performance – one could  build a factory with a production capacity of approximately nine gigawatts of PV modules. In doing so, solar modules with a performance of nine gigawatt could be produced year after year. That's food for thought!

The environmental laureates' call is specifically directed at the participants of the climate conference COP 21 which takes place at the end of this year in Paris. What do you think the chances are a viable climate agreement will be adopted?

I fear that it will be very difficult to define global carbon emission reduction targets. Much would already be achieved if there was a viable agreement on the financing of the Green Climate Fund, for which we will need at least 100 billion annually from 2020. A portion of these funds should be used to finance the construction of wind and solar plants around the world. Such financing will reduce the price of renewable energies and generate an avalanche effect through the sale of the plants. However, if there won't be a global agreement on carbon emission reduction, the carbon taxation – which the environmental laureates are demanding – should ensure that carbon emissions will become simply uneconomical in the next 20 to 30 years.

As Director of the Fraunhofer Institute for Solar Energy Systems in Freiburg, you are a specialist in the development of renewable energies. Are renewable energies already in a position to meet the world's energy needs?

I would like to answer this question with a clear “Yes”. The technologies we have today – which were partly developed in in our institute – would allow to change the global energy system mostly to renewable energies until 2030. In order to do this, large investments are required that need to be amortized within a few years. It is expected that through further research and technology development the costs of renewable energies and also of the storage and transmission of energy will continue to fall drastically. Considering the current prices, for example for photovoltaics and wind energy, now would be the right time to start.

Why is this not happening yet on a large scale?

This question ignores the fact that we're not the only nation in this world in an energy transition. A good example is the state of California that is – with only half of Germany's economic power and half of the power consumption – significantly further ahead in the energy transition than Germany. There are no more coal-fired power stations and only one nuclear power plant; renewable energies are expanding rapidly. If we now ease off in Germany's energy transition, other countries will harvest the fruit of our significant commitment as technology developer and create many jobs.

Prof. Dr. Eicke R. Weber is the director of the Fraunhofer Institute for Solar Energy Systems ISE in Freiburg and chairman of the board of trustees of the European Environment Foundation.

Organizer of the “International Convention of environmental Laureates” is the European Environment Foundation whose board of trustees is made up of 16 well-known personalities in the field of environmentalism Ernst Ulrich von Weizsäcker, Monika Griefahn, Marcello Palazzi, Professor Antonio Luque or Giovanna Melandri. The board is chaired by Eicke R. Weber, director of Europe's largest solar research institute, the Fraunhofer Institute for Solar Energy Systems in Freiburg. 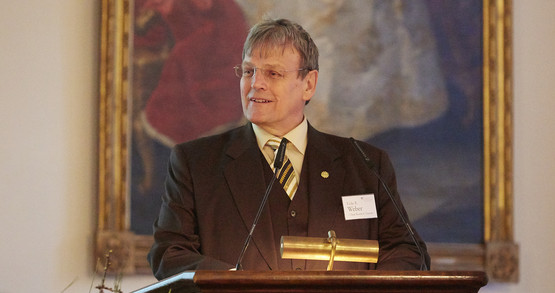