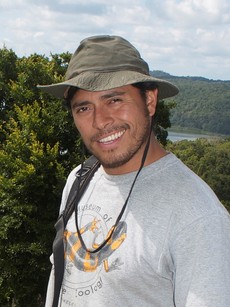 Amphibians Researcher and Conservationist at Fundaeco; Curator of Herpetology

Carlos Roberto Vasquez Almazan is a Biologist and Conservationist with emphasis in Critical Endangered Biodiversity sites in Guatemala. He carries out surveys and established a network of nature reserves through the country for amphibian conservation. He also established two amphibians reserves in Guatemala and organized support for the creation of a new National Park in Guatemala. Vasquez Almazan is curator of Herpetology in the Museum of Natural History and PhD Candidate at National Autonomous University of Mexico. In addition he described and discovered many new species of salamanders and one snake in Guatemala.

Please log in to EnviroNetwork to send a message
< Back